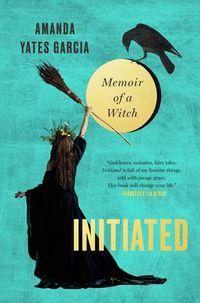 FREE in Echo Park, the Oracle of LA Amanda Yates Garcia will be joined by renowned writer and comedian Sara Benincasa for a deep dive into Amanda's stunning memoir "Initiated: Memoir of a Witch"

Declaring oneself a witch and practicing magic has everything to do with claiming authority and power for oneself, of taking back our planet in the name of Love. Initiated is both memoir and manifesto calling the magical people of the world to take up their wands: stand up, be brave, describe the world they want, then create it like a witch.

Descending into the underworlds of poverty, sex work, and misogyny, Initiated describes Amanda's journey to return to her body, harness her power, and create the magical world she longed for through witchcraft. Hailed by crows, seduced by magicians, and haunted by ancestors broken beneath the wheels of patriarchy, Amanda's quest for self-discovery and empowerment is a deep exploration of a modern witch's trials - healing ancient wounds, chafing against cultural expectations, creating intimacy - all while on a mission to re-enchant the world. Peppered with mythology, tales of the goddesses and magical women throughout history, Initiated stands squarely at the intersection of witchcraft and feminism. With generosity and heart, this book speaks to the question: is it possible to live a life of beauty and integrity in a world that feels like it's dying?

Amanda Yates Garcia is a writer, artist, professional witch, and the Oracle of Los Angeles. Her work has been featured in The Millions, The LA Times, Time Out, LA Weekly, GOOP, Glamour, The London Times, CNN, Salon, as well as a viral appearance on Tucker Carlson Tonight. She has led classes and workshops on magic and witchcraft at UCLA, UC Irvine, MOCA Los Angeles, The Hammer Museum, LACMA, The Getty and many other venues. Co-host of the popular Strange Magic podcast, Initiated is her first book.

Sara Benincasa is a comedian, actress, screenwriter, and the author of REAL ARTISTS HAVE DAY JOBS (William Morrow 2016) as well as DC TRIP (Adaptive 2015) GREAT (HarperTeen 2014) and AGORAFABULOUS! (William Morrow 2012). She also wrote a very silly book called TIM KAINE IS YOUR NICE DAD (2016) and has contributed to comic books from Marvel and Starburns. She travels frequently to speak at colleges, companies and community events about reducing mental health stigma. Born in New Jersey, she graduated from Warren Wilson College and Columbia University Teachers College. She lives in Los Angeles.