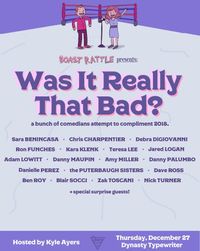 BOAST RATTLE PRESENTS: Was It Really That Bad? A Bunch of Comedians Attempt to Compliment 2018

BOAST RATTLE PRESENTS: Was It Really That Bad? A Bunch of Comedians Attempt to Compliment 2018

Comedians will take turns going on about a positive, funny, ridiculous thing that brought them joy in the last year. Sure, the year wasn’t objectively great, but there had… to be… something… right? An instagram dog, a charity that did good work, a celebrity falling down, something. See which comedians can be the funniest about the nicest from the last year.

About Boast Rattle Boast Rattle is a roast-style COMPLIMENT CONTEST. Created a few years ago and hosted by Kyle Ayers, comedians compete to see who can compliment one another in this showdown of sweetness, this clash of consideration, this barrage of benevolence. Playing off of the idea of roasts, Boast Rattle has two comedians go head-to-head, delivering alternating blows of the nicest order. Two rounds. One lucky crowd member who gets some on-the-spot boasting. One Champion of Charity, Master of Magnanimity.